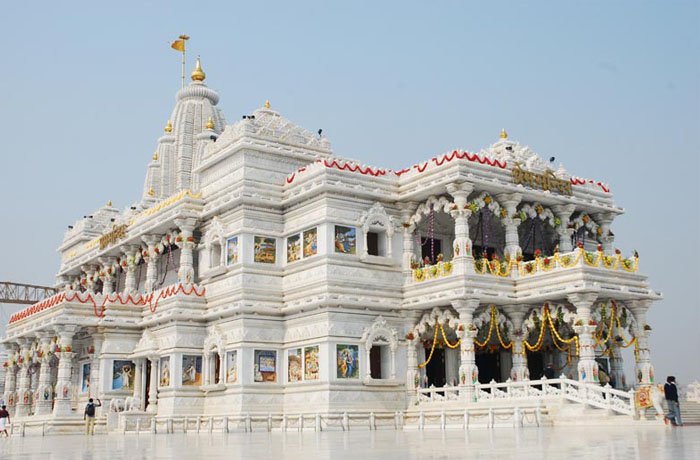 8 Places To Visit In Mathura

The birth place of Lord Krishna, Mathura is an ancient city of India known for its various monasteries of the Hindu religion and various pilgrim spots and temples. The city is one of the oldest in India and is mentioned in the ancient Hindu epic Ramayana. The region however was inhabited since the 6th century BC and came under various historical and mythological dynasties of India. Owing to its ancient culture and tradition Mathura contains a plethora of tourist attractions, the best ones of those are as follows.

“Krishna Janma Bhoomi Mandir” is known to be the birthplace of the Hindu deity Lord Krishna who was the 8th incarnation of the deity Lord Vishnu. The God king was said to be born in a prison cell and the exact location of the prison cell is now occupied by a temple that is frequented by thousands of tourists each year. The best time to visit is during the festival of Janmashtami and Holi when the festivities are at their prime.

The Islamic mosque was built in 1662 AD by the governor of the Mughals, Abd-un-Nabi. Jama Masjid in Mathura is one of the major historical monuments in Uttar Pradesh. The mosque houses the tomb of the Mughal governor and is located close to the aforementioned Krishna Janma Bhoomi Mandir.

A fairly new temple in the ancient city of Mathura, the Dwarkadhish Temple was established around 150 years ago by a devotee of Lord Krishna. The temple is known for its amazing swing festival at the start of the monsoons in this region. The Lord Krishna depicted in the idol here is in his “King of Dwarka’ form and is depicted without the peacock feather and the flute.

Located near Radha Kunj, Kusum Sarovar is 450 feet long and 60 feet deep. The reservoir got its name from Krishna’s famous consorts Radha, who was said to meet Lord Krishna near the tank. The reservoir has a calm and serene environment and can be used by visitors for a swim. The major attraction here is the evening Aarti which is not to be missed and is commonly photographed by the shutterbugs.

The town is considered to be a major pilgrim spot for the Vaishnavites in India and is known to be the place where Lord Krishna slew a Demon Bull. The pool of the Radha Kund is said to be formed by Lord Krishna who struck the earth and the water emerged at this spot. the pool is considered to be the most sacred and the various pilgrims frequent the place in thousands of numbers.

Also known as Kans Fort, the Kans Qila is named after Lord Krishna’s maternal uncle and was built by Raja Mansingh I of Jaipur. Raja Mansingh was one of the Navratnas of the Mughal emperor Akbar. The fort is built in a unique Hindu and Mughal styled architecture near the banks the the Yamuna River.

Formerly known as Curzon Museum of Archeology, the Mathura Museum was constructed in the year 1874. The museum due to its unique architecture and the important artifacts housed here has also appeared on postage stamps issued by the government of India. The museum houses various ancient archeological findings dating back to the Kushana and the Gupta Empire.

The holy town of Mathura in Uttar Pradesh is also famous for its special sweet dish called the ‘Peda’ and the city has been mentioned several times in the religious texts as one of the revered pilgrim sites for the Hindus. The above-mentioned places are a must visit as it provides the deep insight of the cultural and ancient historical relevance of Mathura.

Press. This is your first post. Edit or delete it, then start writing!

One thought on “Top 8 Places To Visit In Mathura”